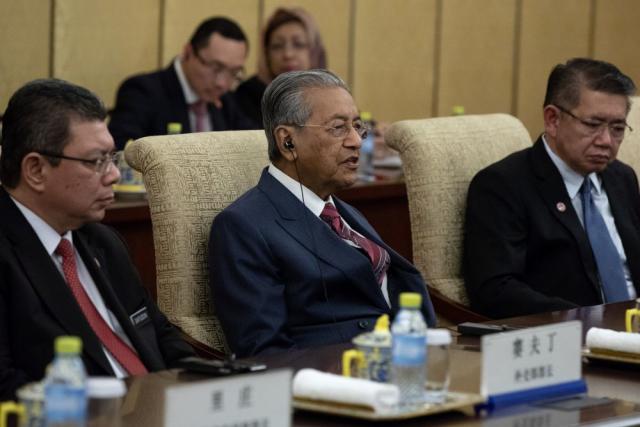 BEIJING, Aug 21 ― Tun Dr Mahathir Mohamad spoke today of the “stupidity” of Datuk Seri Najib Razak’s government in negotiating contracts and deals which his administration is now trying to untangle.

“Such stupidity has never been seen before in the history of Malaysia,” the prime minister told Malaysian reporters here at the end of his five-day official visit to China today.

Dr Mahathir said contracts negotiated with Chinese companies for the East Coast Rail Link (ECRL) and pipeline projects had no exit clauses so Malaysia has to pay out “huge sums” in compensation.

“It’s the stupidity of negotiations. There must be exit clauses. Now we have to pay huge sums of money.”

The PM was elaborating on talks he had with China’s leaders during his trip here in which he was compelled to explain Malaysia’s difficult fiscal position which is a result of ECRL and two gas pipeline projects involving Chinese loans and contractors.

Dr Mahathir said China’s President Xi Jinping and Premier Li Keqiang had agreed with him on the point that Malaysia had no choice but to nix the projects.

Malaysian officials will now look at negotiating settlements and other matters related to the projects.

“We must now find a way to exit these projects at the lowest cost possible. It is all because of our own stupidity.”

On how Malaysia could expect to recover the huge sums of money, Dr Mahathir said maybe “we can recover from Najib.”

“He was the one after all who signed. What kind of stupidity is this?” Dr Mahathir repeated.